Myanmar Culture And How To Experience It

Home » Myanmar Culture And How To Experience It 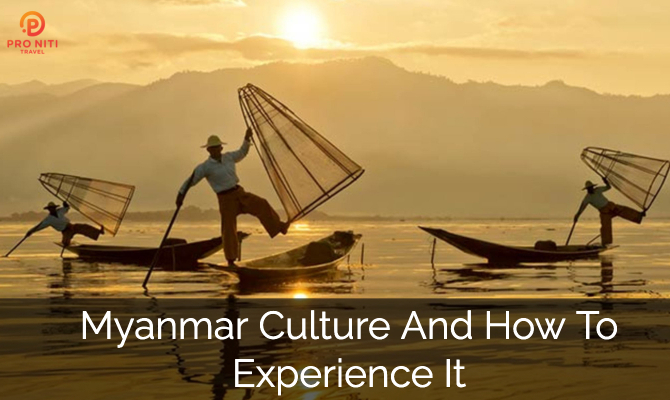 Myanmar is a country that offers an extraordinarily rich culture and history. Made up of many different groups offering their customs and traditions, yet united by some common threads, Myanmar’s culture is sure to enchant visitors.

The opportunity to show Myanmar culture to visitors is one of the main drivers and passions behind Pro Niti Travel. We believe in an authentic and respectful cultural exchange. Not only this is a learning experience that widens the horizons of visitors to Myanmar, but it can also lead to a more compassionate and understanding world.

So, whether you are just interested to learn more about culture in Myanmar and if you are planning a visit and would like to know how to experience it, this article will help serve as an introduction!

A (very) brief history of Myanmar

The history of Myanmar spans at least 2,300 years – and probably far more. By at least 300 BC, a rich civilization existed in the south of Myanmar, known to and respected internationally. Over the next few hundred years, the civilization expanded north, covering much of what we now know as Myanmar.

In 849, the city of Pagan was founded, and it would grow to be one of the most powerful. Two hundred years later, the country was united, and soon after the First Burmese Empire began.

The empire grew, and the 13th Century is considered the Golden Age for the realm. However, it would eventually decline, and the country was splintered again. Over the next several years, there were numerous conflicts and successes, including the Second Burmese Empire.

In the mid- to late- 1800’s, the British gradually gained control of the country then known as Burma. This occupation would last for about one hundred years until Myanmar gained its full independence in 1948.

Many historical events have shaped Myanmar and its culture. In particular, the fact that many different ethnic and social groups have been a part of the rich history has influenced the diversity that is still seen today.

How to experience the history of Myanmar

It is difficult for one to go to Myanmar but not experience the history of Myanmar! It is genuinely found all over the country, and you will have ample opportunity to learn more about Myanmar’s past.

One particularly unmissable place for history lovers is the stunning city of Bagan, with its hundreds of historic pagodas. 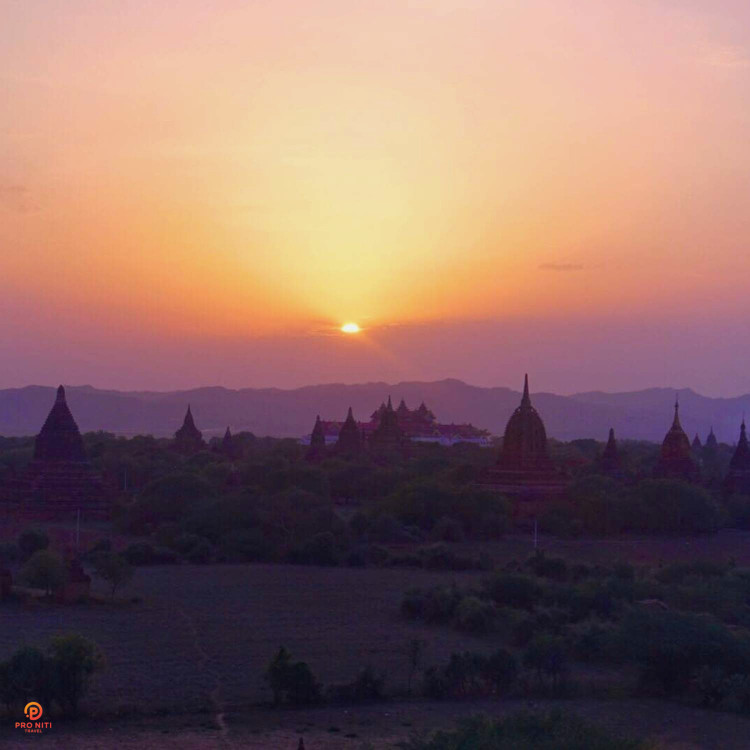 Temples in Bagan glowing along with the sunset

Myanmar has no officially stated religion, and there is diversity throughout the country. However, the most common faith in Myanmar is Buddhism, and it has strongly influenced the culture and customs of the country. Myanmar is considered the holiest Buddhist nation on earth, with Buddhism which has been prosperously present for over 2,000 years.

It is estimated that more than 85% of Myanmar’s population practices Theravada Buddhism. This belief is based on the dhamma, or teachings of Buddha. These teachings help people to achieve enlightenment of life and shape many of the customs and traditions in Myanmar.

While you are in Myanmar, you are likely to see Monks dressed in their distinct robes. Most boys in Myanmar will enter a monastery to live as a novice monk for a period of their life. Overall, Monks are treated with great respect in Myanmar.

Another way that Buddhism has influenced Myanmar’s culture is the existence of many religious festivals throughout the year. These often have deep spiritual significance but are also joyous occasions filled with cultural performances.

While Buddhism is one of the most significant influences on Myanmar, there is evidence that a different type of spirituality preceded it. This spirituality revolved around the worship of Indigenous spirits known as nats, and you can still see evidence of the influence of this spirituality today.

Also, there are many other religions practiced in Myanmar. Islam, Christianity, and Hinduism are all represented in Myanmar, as well. 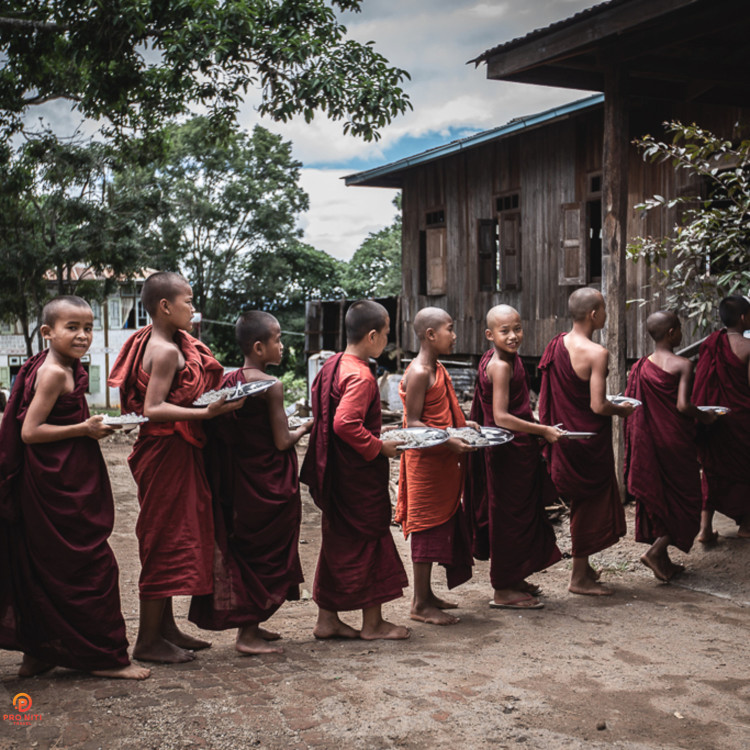 How to experience religion in Myanmar

Visiting Myanmar is likely to be a profoundly spiritual and significant experience, no matter what your beliefs are. There is something incredibly moving about visiting pagodas and seeing the devotion of people, and learning more about the teachings of Buddhism.

With more than 2,000 temples in Bagan alone, including the beautiful Shwesandaw Pagoda, you are almost sure to get an opportunity to experience this for yourself.

The arts have long been an essential part of Myanmar culture like much of the country; it has been influenced by religion and migration. As a result, the arts in Myanmar are diverse and plentiful.

Several art forms are traditional in Myanmar, and many people still create beautiful works using traditional methods passed down through the generations. One of the most popular types of art in Myanmar is using concrete mostly to decorate elaborate and beautiful pagodas. Other famous traditional techniques, including woodworking, bronze casting, and lacquer-ware.

Traditional music and dances tend to vary from group to group and are often performed at festivals including the Naga New Year. One common way to play music in Myanmar is as part of a hsaing waing, a traditional orchestra with instruments including gongs and drums. Other devices, such as the conventional harp saung-gauk (thought to be the oldest style of the harp in Asia) may also be included in the hsaing waing or performed separately. 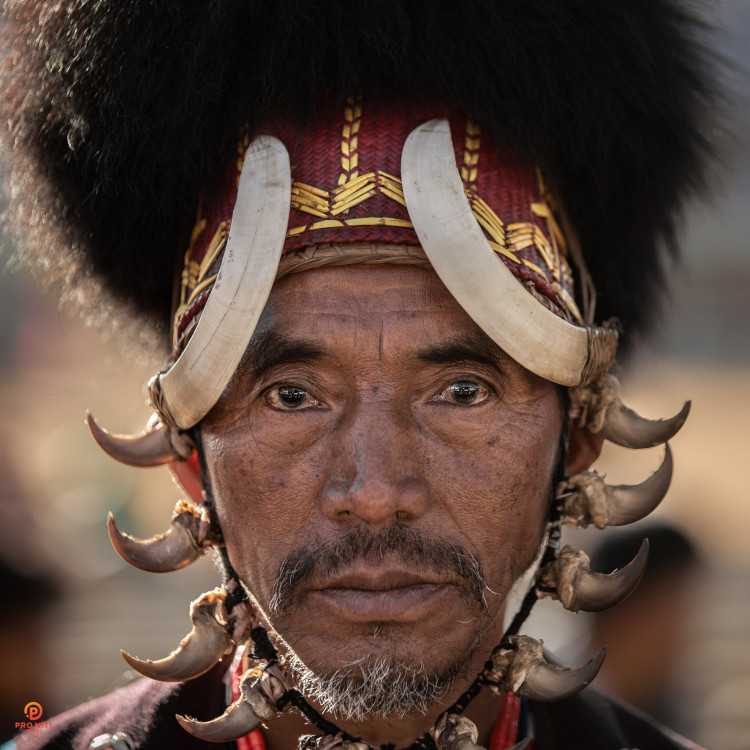 A man of Naga races in Myanmar

How to experience art in Myanmar

It is a fascinating and memorable experience to see the arts in Myanmar. One of the best ways to see this element of Myanmar culture is to attend a traditional festival, where you are likely to experience traditional dance, music, food, and costumes. Luckily, Myanmar has many festivals – so you have a good chance of being able to see one during your visit.

Another way to experience the arts in Myanmar is to visit a traditional artisan. This will allow you to see the process of creating art and also take home a beautiful and authentic souvenir from a true artist. An artisan at a weaving industry at Minnanthu Village

Food is, of course, an essential part of any culture – and Myanmar is no exception! Food is not only for nourishment but also something that is shared with family, friends, and during festivals.

Like much of Myanmar’s culture, the cuisine has been overwhelmed by many different ethnic groups and does vary a little depending on the region you visit. In particular, you are likely to notice a difference between the cuisine in-land and the cuisine on the coast.

Overall, Myanmar’s cuisine has been heavily influenced by Indian, Thai, and Chinese styles of cooking – as well as local produce. Some common dishes include mohinga, a delicious rice noodle and fish soup that is often eaten at breakfast (although we won’t judge if you have it for every meal!), and nangyi thoke, a flavorsome noodle-based salad which is served with an accompanying soup.

Where to experience Myanmar’s cuisine

Don’t worry – if you visit Myanmar, you are sure to have the opportunity to experience delicious traditional food. Although there are some multicultural restaurants in Myanmar, there are still many, many places serving traditional dishes – from small street food stalls to upscale restaurants.

If you are traveling as a part of a tour, then your guide will certainly be able to help you find some high-quality, authentic Myanmar cuisine to enjoy. You may even like to try your hand at a cooking class, or purchase some authentic ingredients from the market!

Another important part of Myanmar culture is traditions and customs. Again, these do vary quite a lot around the country, but there are some commonalities that you might experience when visiting!

In general, Buddhist teachings has influenced society in Myanmar. One particularly important matter is to have respect for others, especially elders. Older people and Buddhist monks are treated with a great deal of respect in Myanmar.

Some concepts in Myanmar do not translate comfortably to English, such as the ideas of ana and hpon. “Ana” refers to the idea of saving face – in Myanmar, it is considered a very poor form to raise your voice or become angry. As a result, you will likely find people in Myanmar to be very polite and respectful. In fact, people in Myanmar are generally extremely kind and hospitable.

While people in Myanmar – and especially in the cities – are quite accepting, it is a good rule of thumb to dress modestly and avoid public displays of affection. This is especially the case at religious sites, where your show of respect will be appreciated.

Similarly, it’s a good idea to be aware of a few good manners in Buddhism – in particular, touching someone on the head or pointing at them with your feet is considered very rude! If in doubt, your guide can always help you to be aware of any cultural matters.

How to experience customs in Myanmar

As these customs are very much a way of modern life in Myanmar, you will almost certainly experience them while visiting! To learn more about traditional culture and ways of life, then visiting more remote or rural communities is an incredible experience. Pro Niti Travel is proud to support community-based tourism and can help to foster connections so you can learn more about customs in Myanmar.