The Ultimate Bagan Tour: What You Just Can’t Miss

Home » The Ultimate Bagan Tour: What You Just Can’t Miss

The ancient city of Bagan is one of the highlights of Myanmar, and a truly magical place to visit. You can really feel the history as you walk around this enchanting location. And, of course a Bagan tour is sure to be a highlight of your stay in Myanmar.

Although many of Bagan’s attractions are historical, it is also a modern city with a bustling variety of shops, restaurants and markets to enjoy. To help you make the most of your time in Bagan worthy, here are the highlights you just can’t miss while on a tour of Bagan.

Background for Your Bagan Tour: The History of Bagan

A tour of Bagan is more interesting if you know the immensely fascinating history behind this beautiful place.

There is some debate about when the area we know as Bagan was first inhabited. Most scholars believe it was around the 9th century AD, but some old texts suggest it may have been hundreds of years before that.

Bagan as we know it today began around 849 AD when it was fortified as the Pagan Empire grew in power. There is still some evidence of settlement from around this time, although much of it has been destroyed.

In the 11th century, it was decided to make Bagan the capital as the Pagan Empire’s power grew under the might of the Warrior King Anawrahta. At that time, Buddhism had been newly introduced to Bagan, and the decision was made to build many buildings as a sign of devotion. This is how Bagan came to be known as “the city of a thousand temples”. Actually, this is a misnomer – this is just a fraction of the estimated 10,000 which once stood. Literally, there are more than 2,000 temples and pagodas in Bagan. 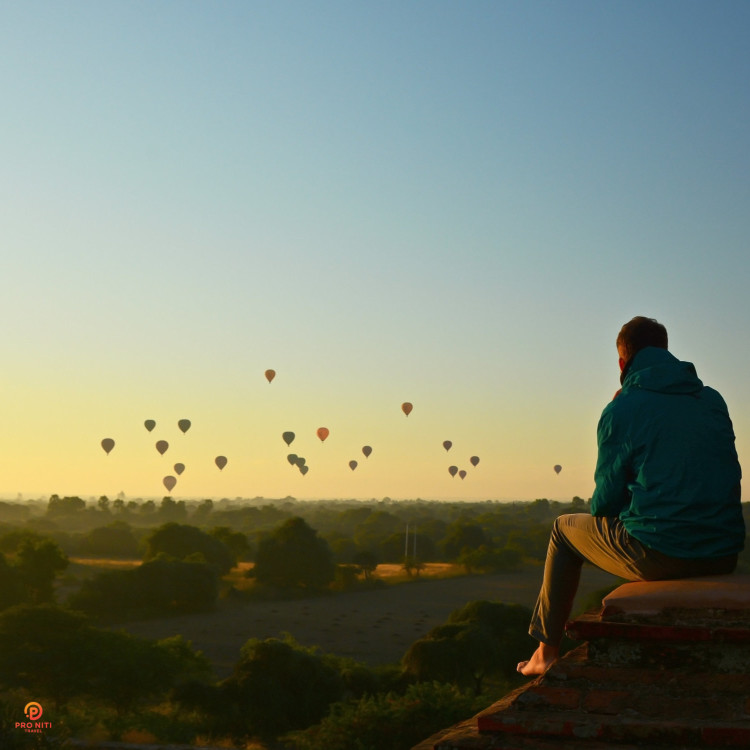 More and more temples were added over the next couple of centuries, however Bagan – and the Pagan Empire – found itself wrapped up in a number of conflicts, especially with the Mongols. A heavy loss in 1287 caused the decline of the city of Bagan, and in 1297 it lost its title as the capital.

Although some people remained in Bagan, the population dwindled. A few additional temples were built over the next few centuries, however, some were damaged by earthquakes in the area. A 1975 quake was especially devastating, although heroic restoration efforts saved most of the temples.

In the 20th century, tourism started to become increasingly popular in Bagan, and people were amazed by the almost magical feeling of the city. Today, Bagan tours are one of the most popular attractions in all of Myanmar.

10 Things You Can’t Miss on Your Bagan Tour

With over 2,000 temples, you won’t be probably able to see all of them on your visit (although you could try!). To help you decide what to fit into your Bagan tour itinerary, here are our ten most unmissable things to do and see in Bagan.

Watch the sunrise or sunset over Bagan

The thousands of temples, stupas and pagodas create an incredible atmosphere in Bagan. Many visitors describe it as magical – the kind of place that gives you goosebumps. It’s beautiful all the time, but it takes on an extra more magical quality as the sun rises or drops, bathing the city in a golden light. This is also arguably the best time for photographers.

The reddish orange tints of the sun fading in Bagan

You can’t enjoy a tour of Bagan without catching a sunrise or sunset in Bagan. In particular, we love the sunset over the plains from Nyaung Lat Phet Hill.

While the temples of Bagan are beautiful from the outside, many have even more incredible interiors. To this day, you can still see amazingly preserved fresco and paintings which generally depict lessons from the Buddha’s teachings. For example, Nandamannya Temple has many scenes, including murals of the Buddha resisting the distraction of some beautiful ladies!

Other temples, such as the Gubyauk Gyi Temple, feature large and beautiful paintings of the Buddha. They are all very beautiful, and definitely unmissable sights for your Bagan tour.

The mural paintings of Buddha on walls of Bagan temples

The twelfth-century-Ananda Temple is considered one of the most beautiful buildings all over Myanmar, and even South East Asia. In fact, some people refer to it as the “Westminster Abbey of Myanmar”, due to how beautiful and significant it is. The intricate and lavish design is inspired by many styles, including Indian and Mon architecture.

Inside, there are four beautiful standing Buddhas which are wrapped in gold leaf. They, along with the beauty of the temple’s exterior, make the Ananda Temple a truly unmissable place to see in Bagan.

Even though many of Bagan’s attractions are steep in history, it is also a modern and lively place. No Bagan tour is therefore complete without finding out what everyday life is like in the city. One of the busiest places for locals in Bagan is at the Nyaung U Market, a sprawling market in the northeast of the city.

The market sells all kinds of fresh produce including fruit and vegetables. You can also buy some souvenirs including clothing and delicious local tea – just get ready to do some haggling! Or, simply sit back and just enjoy the lively and friendly atmosphere and learn more about local life in Bagan.

This beautiful pagoda is one of the most beautiful in Bagan, thanks to its traditional bell-shape and dramatic gold coating. It also has a fascinating story behind it – legend says that the location was chosen in the 11th century when a white elephant carrying a relic from the Buddha stopped on the very spot where it is built.

It is believed to have been built by the Warrior King Anawrahta’s son not long after his father’s death. Today, it is one of the most well-known and most beautiful sites in Bagan. At the temple, you can admire the large lion-like statues guarding the pagoda, and the four 3.5 – 4-metre Buddha statues.

An important part of the culture in Myanmar is various types of art and handicrafts that have been handed down generation to generation. It is truly amazing to see the skilled craftspeople creating treasures right in front of your eyes. Also, they make for the most memorable souvenirs of your Bagan tour.

There are a few places to observe handicrafts being made in the traditional way. Myinkabar Village is famous for its lacquer crafts, which is perhaps the best-known craft style in Bagan. There are also many wood carving workshops and even some puppet makers!

The souvenirs on sale from these makers may not be the cheapest you can find in Bagan. Nevertheless, it is worthy to know that they were really handmade in Myanmar – and the proceeds go to supporting the locals.

Balloon ride over the temples

There’s no bad way to see the temples of Bagan, but it is certainly a once-in-a-lifetime experience to take them in from above! That’s why taking a hot air balloon ride up and over the city of Bagan is sure to be an absolutely magical memory that you will treasure for life.

Ballooning of excitement in Bagan

From above, you’ll really get a sense of how beautiful the landscape is, and just how many temples, stupas and pagodas are spread out around Bagan. If you go in the company with a guide, they can point out the most important and significant temples. Don’t forget to bring your camera to take some amazing photos as you soar over the magical city of Bagan.

Another unique way to take in the sights of Bagan is to hop aboard a boat and sail down the Ayeyarwaddy River. There is something so relaxing about floating over the calm water, feeling the breeze. You can also keep your eye out for the buildings that line the river, and watch as people go about their daily lives in Bagan.

There are many options for which river cruise to take. You may like to take a beautiful dusk cruise and watch as the sun sets over Bagan. Or, you can even take a longer, multi-day cruise between Bagan and Mandalay. What a great way to travel!

The aesthetic view of Bagan sunset from the cruise

As you can probably see, there is no shortage of temples in Bagan. In fact, the biggest difficulty is narrowing down the list of which ones you want to see the most. One of the more unique temples is Htilominlo Temple, which was built around 1211.

The outside is striking as it is made from red brick, which gives it an ochre-red tint. However, the biggest wonder of the Htilominlo Temple and what makes it an unmissable stop on your Bagan tour is the beautiful plaster mouldings. These mouldings are a feature of traditional Myanmar architecture and handicrafts, so are well worth seeing while you are in Bagan.

Take in the view from Mount Popa

Technically Mount Popa lies outside of Bagan, on the road to Mandalay. However, it is very conveniently located to add onto your Bagan tour. It is so incredibly beautiful that it is well worth making the 50-kilometre-journey southeast from Bagan to see it.

Mount Popa is actually a volcano that stands at 1,512 metres above sea level – it is an extremely dramatic addition to the landscape. It can be seen from up to 60 kilometres away during clear conditions. Atop it, there is a beautiful and intricate temple that really cannot be missed. The entire experience of driving up to Mount Popa, climbing it and then looking out over the landscape from it, is a truly magical addition to your Bagan tour. The extinct Mount Popa, the home to Nats

As you can see, there are many amazing places to visit in Bagan. Pro Niti Travel would be delighted to tell you even more about the secrets of this magical place. We have several tours to Bagan, and would love to help you find your dream journey in Bagan! Please have a look at our suggested itineraries here, or contact us, for more information.