Top 10 Places to explore in Mandalay 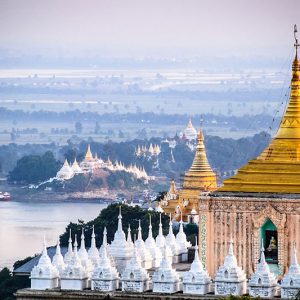 Today, we will take you to the former royal capital of Myanmar filled with the sense of old days. The last kingdom of Myanmar, Konbaung Dynasty ruled by King Thibaw, was ended in 1885 by the entry of British Colony. At that time, Mandalay is the capital of Burma. This was a miserable storyline in Myanmar history. Nowadays, Mandalay is the second commercial city of Myanmar, but the city is crowded with the entry of Chinese people come from the eastern part of China through Shan border gate. Mandalay alone has plenty of great places to visit, but we will show top ten places to explore in Mandalay in here.

The Shwenandaw known as Golden Palace Monastery has its unique and magnificent beauty, formed by teak carvings depicting tales from Buddhist mythology in all of its roof and walls. The monastery was formerly a royal apartment built by King Mindon. After his death in 1878, King Thibaw (the son of King Mindon) moved the palace to the current location as he thought that the ghost of his father still existed in there. In the year 1883, it transformed into a monastery until now. 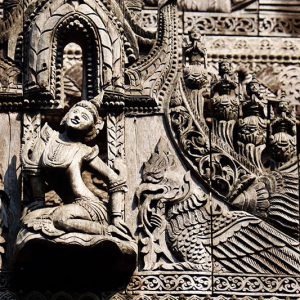 An impressive point of this monastery is that the whole monastery is built entirely by teak wood. Take relaxation and walk around monastery while watching the exceptional architectural sculptures and carvings. It is now being in renovation process but don’t worry, it is still open, and you still can explore there. Note: it is rank as Number 1 place to visit in Mandalay 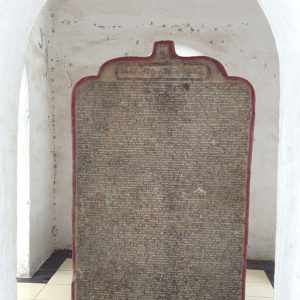 One of the slabs inscribed the Tripitaka text

The KuThoDaw Pagoda is surrounded with 729 stupas arranging straight in line. Each stupa contains a marble slab carved with the Tripitaka text (the Buddhist holy book). This pagoda is constructed in 1860 by order of King Mindon Min. Because of its 729 slabs, it is mostly known as “the world’s biggest book” and is located at the foot of Mandalay Hill. 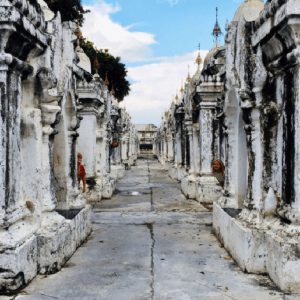 Do not forget to take photos with the backgrounds of hundreds of white pagodas. It is visually fabulous, and the sight lines for photos are enchanting.

Mahamuni Buddha Temple is one of the major pilgrimages located in the southwest of Mandalay. Inside the temple, there is a big Buddha statue called Mahamuni Buddha Image. Some say that its origin is from Arakan brought as the but as the legendary stated that the image is one of the likenesses of Buddha, made at the time of Budda alive; two images were in paradise, and two were in India. 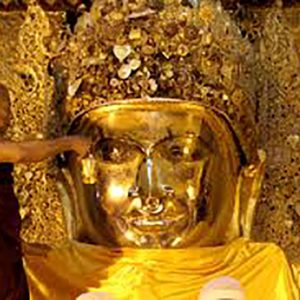 Though it is a busy spot to visit, you should not skip this place as it provides you a range of authenticity of middle Myanmar. Before you exit, shop around the markets for souvenirs.

If you are an early bird, you can see the daily formal face washing rituals in the early morning about 4 am or 4:30 am.

It is nearby from Kuthodaw Pagoda located at the foot of Mandalay Hill. Sanda Muni Pagoda is famous for the large iron Buddha image called Sanda Muni Buddha image and its hundreds of shrines containing inscribed marble slabs. It was built as a memorial to the death of Prince Kanaung who was murdered in 1866 along with three princes. The graves of the princes were buried on the Sanda Muni Pagoda terrace. Lately, the graves were moved to a Mandalay mausoleum. 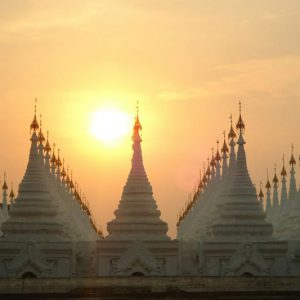 Since it is a worth place to visit, the history of Sanda Muni Pagoda is really interesting even for locals. 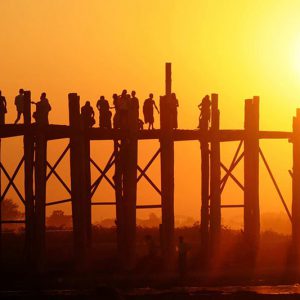 Sunset near U Bein Bridge

U Bein Bridge is a should-not-miss place from Amarapura. It is almost 40 minutes drive from Mandalay, which spans over Taungthaman Lake. The bridge becomes the highlight of Mandalay tour to enjoy amazing sunset and sunrise for the travelers as well as to take awesome photographs. It was recognized as the longest teak bridge in the world using 1,086 pillars. But some small part of maintenance is made upon the needs so that you will see some of the parts are replaced with new wood.

Watching the sunset will offer a feeling of missing somebody and viewing the sunrise will release the tension of your life. Be aware of crowded with tourists and local merchants, but complaining as a touristy destination is not true. So, we recommend the travelers to take a boat to feel the full experience of a picturesque wooden structure while watching sunset or sunrise.

After 45 minutes walking through covered stairs from the foot, one will reach the summit of Mandalay, which is 120 meters above sea level. The city took its name and has been a major pilgrimage site for Burmese Buddhists for nearly two centuries. Travelers can get there by taking a car ride or by foot. 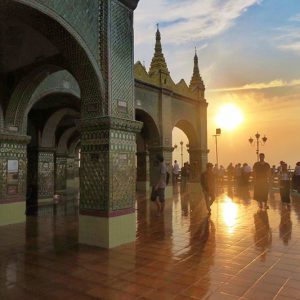 Once you reach the top of the mountain, you feel the attractive panoramic view of Mandalay City. You will see a little bit crowded people taking photographs. Watching sunset or sunrise over the hill is worth for a visit. Especially for the sunset, the atmosphere around the pagoda is calm and peaceful. 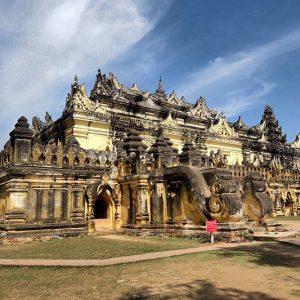 Places we mentioned above were mostly built with woods because of a bountiful supply of wood that time. Unlike other forms of the monastery, Maha Aung Mye Bon Zan Monastery was built of brick and stucco. The usual name of this monastery is Mal Nu Oak Monastery – in that, “Mal Nu” was the Queen who built this monastery and “Oak” means brick. It is remarked as the impressive architecture of Konbaung dynasty. It is a well-preserved and long-standing building though it endures the effect of climate and human activities since 1818. 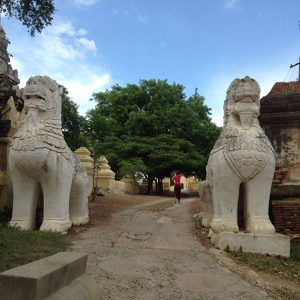 At there, you will see two giant lions gatekeepers as in the Burmese religious buildings. The carvings and ornamentations look alike wooden monasteries but undoubtedly outstanding.

The 1838 earthquake hit most of the vital building including this monastery. If truth to be told, it was renovated four decades later the earthquake.

Mingun Bell is located in Mingun Town, Sagaing Region about one and a half hours of driving from Mandalay. It was the largest functioning bell in the world until 2000 before casting Bell of Good Luck from China. Its weight is 55,555 viss (199,999 pounds or 90tons), and the weight of the bell is written on its surface as “Min Phyu Mhan Mhan Pyaw.” Those mnemonic words represent number 5 by means of the Burmese numerology. 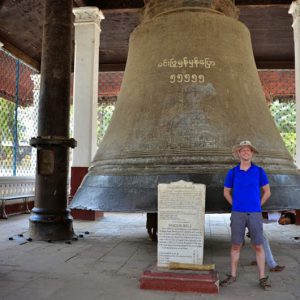 It is now remarked as the third largest functioning bell in the world. The bell itself is impressive and crowded with locals and foreigners taking photographs in most of the time.

It is the last royal palace of the last kingdom of Myanmar, Konbaung Dynasty. King Thibaw is the last king of Myanmar kingdom before captured by British Colony. Many places of the complex were destroyed during the World War II by the bomb attack, but only the royal mint and the watch tower survived. Then it was rebuilt at the start of the 1990s with some modern materials. 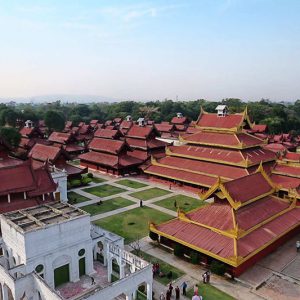 Now, it became a primary tourist attraction and the heart of Mandalay. Most of the places are controlled by the military for the security reason, but the main royal mint is open. Things to do in Mandalay Palace are; climb up to the watchtower with an overview of Palace and Mandalay, taste the feel and capture the moment.

Now, the last place is the paradise of souvenir. The jade market is famous among the visitors as it let them buy hand-made jade products and also study how jade is being crafted. The market is quite busy in the morning with the sellers and buyers (dealers) because the main trades take places at that time. However this is not a tourist attraction site, it is usually crowded with tourists and local visitors. Yet there are many stalls to explore, please be careful about different pricing and different quality if you buy an expensive thing. 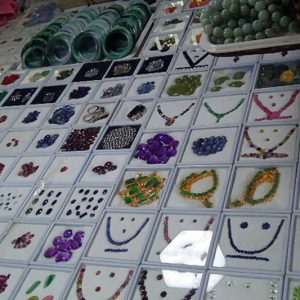 You can take the pictures of the process of making crafts but show them respect and interest. The entrance fees for this market alone is 2,500 MMK, so it is worth to pay. It is open every day except Full Moon Day of every month.

We hope this guideline may be helpful to our viewers and guest since it includes up-to-date information. As we told in above, we suggest these ten interesting places will most suitable for our guest yet Mandalay has a lot of places to visit and things to do.

Please be careful to wear scandals (or) slippers and make sure supposed to cover your knee and shoulders, especially for women because of its restriction when you visit around Mandalay and pilgrimage areas. 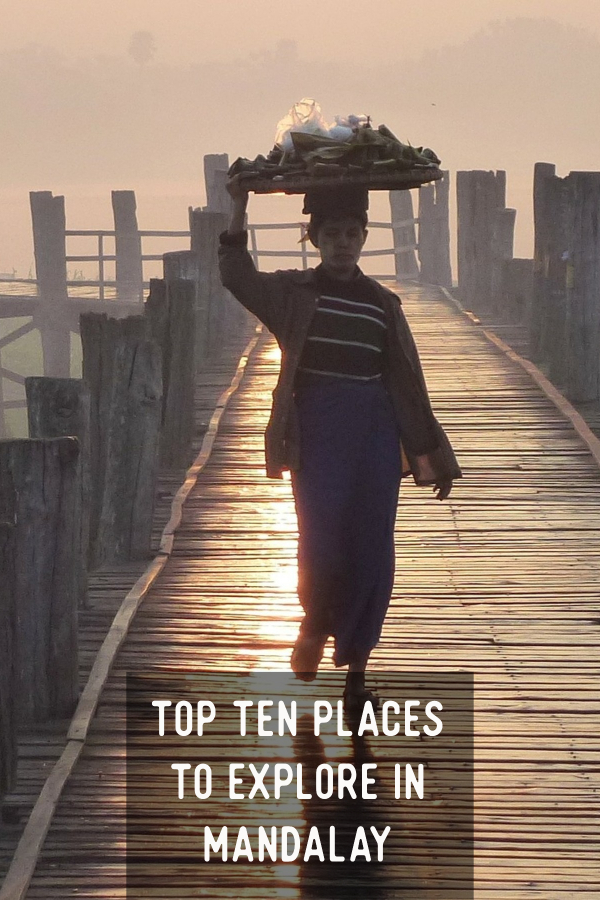