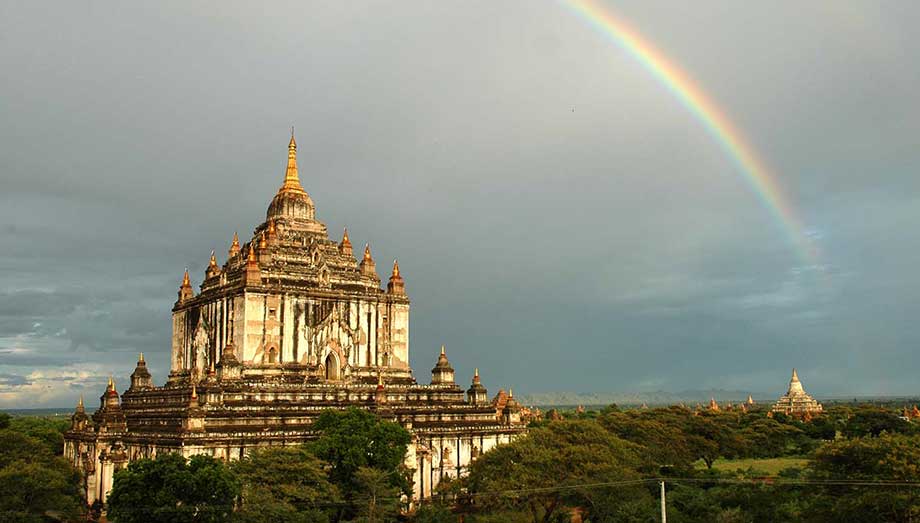 Bagan is the site of over 2000 temples spread across a vast expanse of open plains. Enjoy the jaw-dropping scenery day in and day out with so many ways to travel around from on the ground such as horse and cart or bicycle to up in the air with a hot air balloon Bagan really does give you a magical vibe when visiting. There are thousands of temples spread across the land in Bagan. They show the religious devotion that many people have provided over the thousands of years. It is like a heaven for archaeologists as they find many new things here on a daily basis all combined with some inspiring views that really are like nothing else on planet earth. One of the big advantages of the area is that once you have paid the entry fee you’re free to explore at your own pace and discover whatever you can find. Another beauty of Bagan is that the locals here are so friendly and warm to everyone they encounter, and you do not get many of the hard sellers trying to sell you something you do not want nor need. Every one of the temples, stupas or Pagodas has a unique story that you can unfold. You can no longer climb over the temples but nevertheless, you can still endeavour in the beautiful interiors of each of the 2,200 temples plus. A great time to visit any of them is when the sun is rising or falling as it gives a truly cinematic feel to the whole experience. The area is far too large to be covered by foot so there are various other methods of transportation around the area on offer. These include bicycle, which is probably the cheapest and most efficient way which gives you freedom, horse and cart which could be quite a romantic way to transport or for the most spectacular views a hot air balloon gets you to a great vantage point high up in the sky. 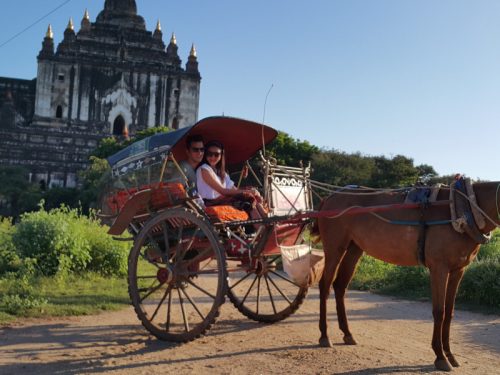 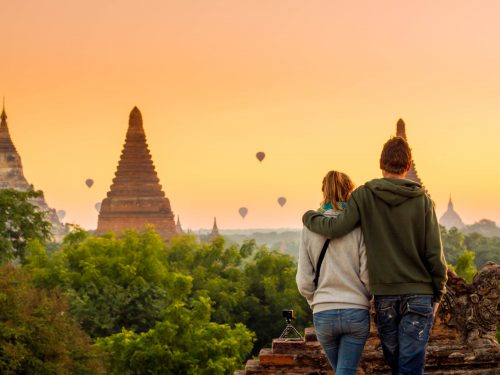 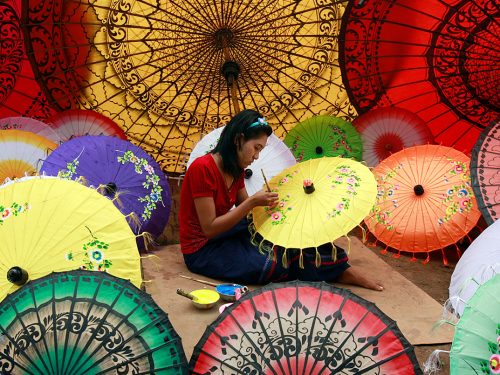 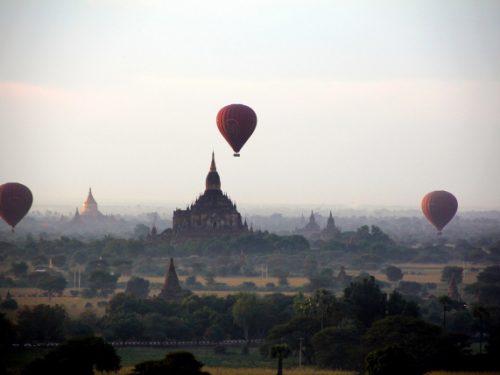 5 Days - Magical Yangon and the Ancient Temples of Bagan 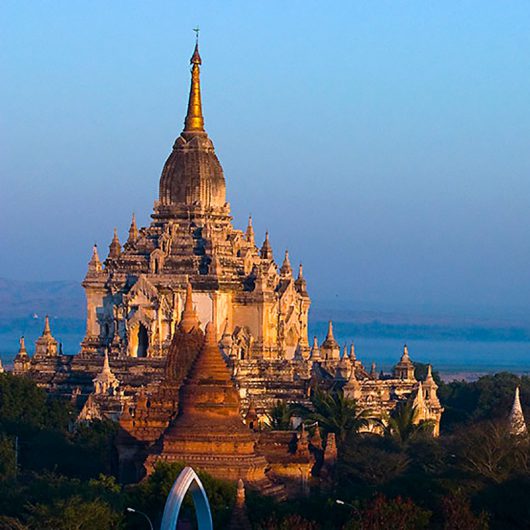 The Nine Wonders of Shwezigon Pagoda are- 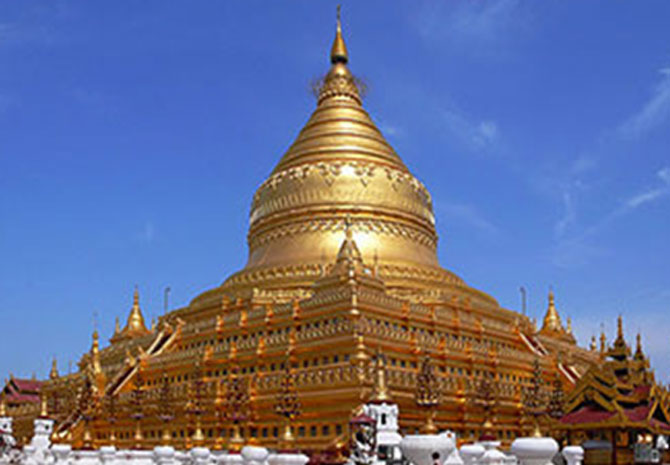 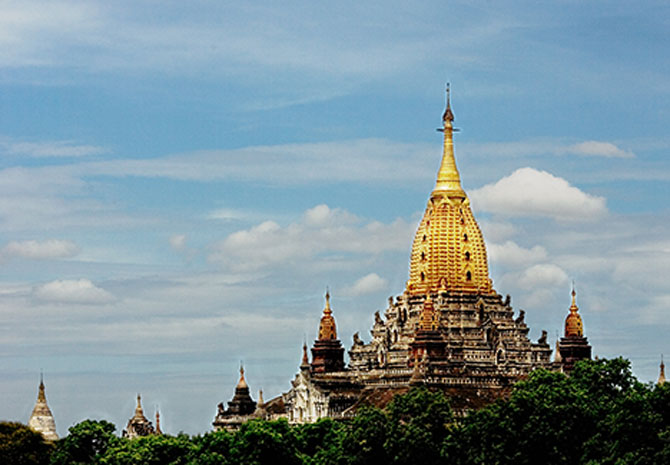 Ananda Temple was built by King Kyansittha. It is one of four surviving temples in Bagan. There are four standing Buddhas, each one facing the cardinal direction of East, North, West and South. In four Image of Buddhas, the images facing north and south are original of the Bagan-style depicting the dhammachakka mudra, a hand position symbolizing the Buddha’s first sermon but other two images of Buddhas are new replacements because of destroyed by fire. All of four Buddhas Images are made by teak wood.

The original south facing Buddha has a unique architectural display, when it is view from close quarters depicts a sad look. However , the same image viewed from a distance gives an expression of mirthfulness.

The east and west facing Buddha images are made in the later Konbaung or Mandalay style. The east-facing image of Buddha is shown holding, between the thumb and middle finger, a small nutlike sphere – a herb. This herb is said to symbolically represent the Buddha suggesting dhamma (Buddhist philosophy) as a cure for misery and distress. In this mudra, both arms hang at the sides with palms stretching out. This mudra is not seen in traditional Buddhist sculpture outside this temple.

In the west-facing Buddha, the abhaya mudra is displayed – with hands outstretched in the gesture of fearlessness. At the feet of this Buddha two life-size statues made in lacquer, representing the crowned figure of King Kyanzittha kneeling piously in prayer, and Shin Arahan, the Mon monk who converted the King into Theravada Buddhism (meaning “the Teaching of the Elders”) and as a primate also crowned the king, are also displayed. The western portico also depicts two Buddha footprint symbols on pedestals.

The architectural of Ananda Temple are Mon and adopted Indian Style. In Ananda Temple, you can see all kinds of Myanmar arts – architecture, stone sculpture, stucco, glazed plaques, terra cotta, wood carving, artwork of blacksmith and etc. Ananda Temple is the best architectural accomplishment in Bagan. The temple was damaged by the earthquake in 1975. However, it has been fully restored and is well maintained by frequent painting and whitewashing of the walls.

Dhammayangi Temple shape like an Egyptian pyramid. The amazing feature of Dhamayangyi is the excellent technique of brick-laying. Only mud motor was used, the massive structure has remained several earthquakes because of best brick- laying technique. And also a needle could not pierce them. There are four sides at Dhammayangyi Temple but only eastern side is open and it has a huge Buddha image in the niche. The other three sides were blocked. 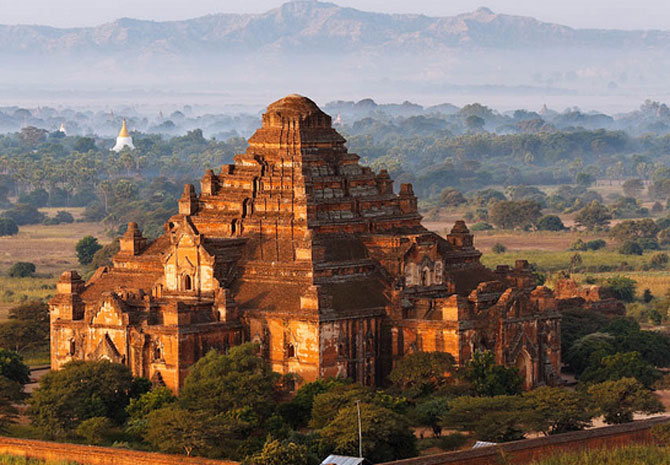 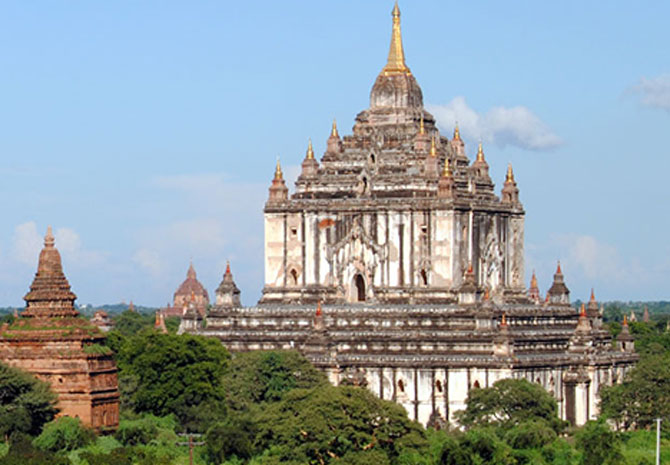 Thatbyinnnyu Temple was built by King Alaungsithu. It is the tallest structure in Bagan. Like Dhammmayangyi Temple, the technique of brick lying was excellent. The bricks in the walls of the upper terrace were laid horizontally and vertically in an alter-nate style. There are big statues of Buddha in the ground floor, north, south and west which was made by brick and cement. There are original mural painting on the ceiling and walls of the vaulted corridors on the western entrance.

Shwesandaw Pagoda built by King Anawrahta. Shwesansaw Pagoda has five terraces. On the topmost terrace rises a bell-shaped stupa. All four sides have each a stairway leading right up to the fifth terrace. Enshrined within the pagoda are sacred hairs of Gautama Buddha. On the west of Shwesandaw Pagoda, there is a huge reclining Buddha image of 70 feet long heading towards south. It is a good place to see the sunset of Bagan. 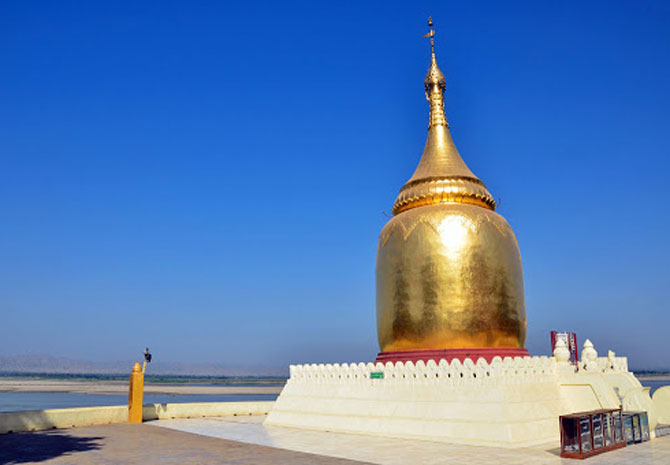 Bu Pagoda was built by King Pyusawhti. It is located at a bend on the right bank of the Ayeyarwaddy River. It is one of the most notable shrines among the thousands of new or ruined Pagodas in Bagan. The shape of the pagoda is typically Pyu. The pagoda was built in cylindrical form with no decoration of art work. The pagoda enshrined Buddha’s relics.

It is a good place the see the sunset from the bank of Ayeyarwaddy River.

Htilominlo Temple was built by King Htilominlo. The temple is three stories tall, with a height of 46 metres (150 feet). They were built of red bricks and cement only. There are eight Buddha images, four on the ground and four on the upper storey. They face each direction. The upper vaulted corridor is flanked by two rows of niches enshrining stone artworks. 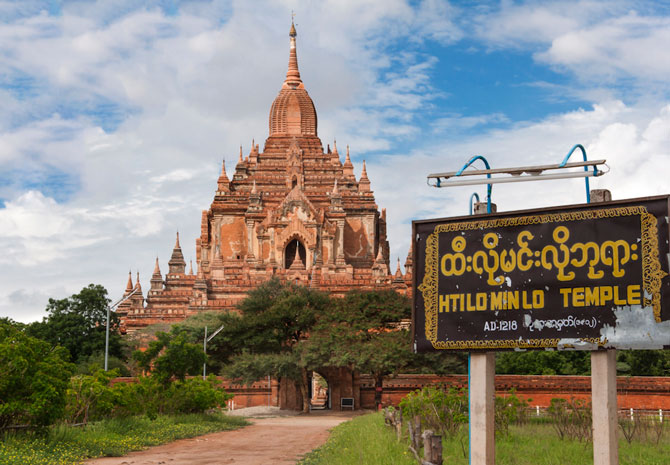 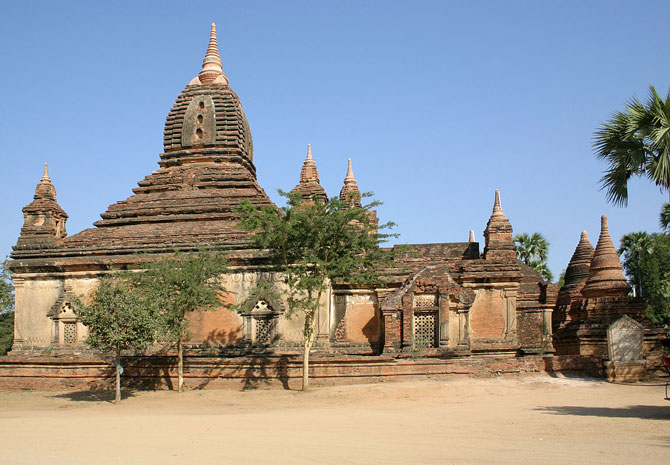 It is a 13th century temple has an Indian style spire. It has interesting wall painting depicting scenes from the Jakata.

Manuha Temple was built by King Manuha. King Manuha was ex-king from Thaton. According to the inscription the Manuha Buddha Image was made and dedicated by King Manuha . He sold his own ruby ring named “Mano maya” to the rich man of Myin Kaba who paid six bullock carts load of fine pure silver as price for it. With that money, he built this pagoda. He did this religious merit in cause he wished to attain Nivirna. But before attaining Nivirna, during the course of Samsara(Cycle of endless rebirths) he wished he would be king whom enemies could never conquer.

The sacred Buddha’s relics were enshrined in the image. The image of the Buddha entering Nivirna (dying Buddha) was made. It took 6 months and 6 days to complete the image making Around the Image were grown coconut, pal, mango, and jack fruit trees and flowering plants which the king dedicated to the sacred Image. There are three huge sitting Buddha’s Images and One incumbent Buddha image. Manuha Temple is one of the oldest temples in Bagan. 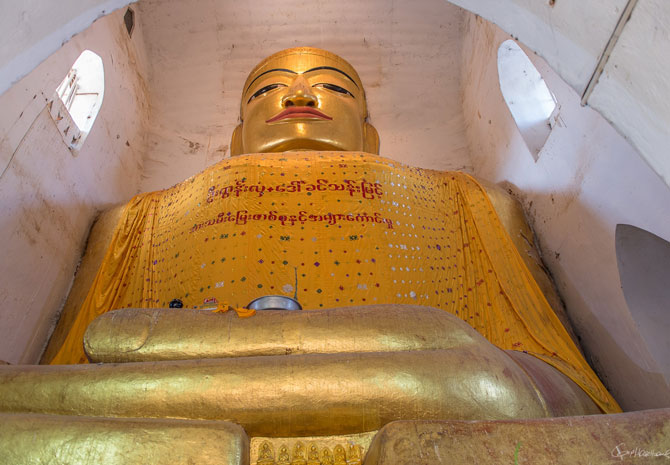 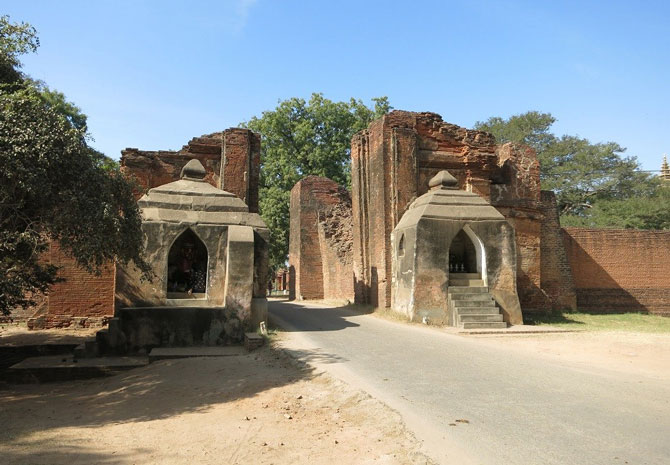 Tharaba gate is the only surviving gate of Bagan. The gate is located to the east of the old city. The gate consists of two brick-walled shrines, each opposing one another, of two guardian nats, named Min Mahagiri and Hnamadawgyi (Shwemyethna), who allegedly were executed by order of king. This is the only one left of the twelve gates of the walled city which King Pyinbya established in 849. The gate is interesting because it is the only piece of secular architecture left.

Archeological Museum is located on the south of Gandaw Palin Pagoda and north of Ananda Temple. It was established in 1904. It is a complex of one octagonal main structure in which archeological objects are to be displayed and three big open sheds in which stone inscriptions are to be set up.

In the center of the octagon is the inscribed stone pillar with four faces, each face bearing inscription in a different language— Pyu, Mon, Myanmar and Pali. This pillar is known HS Yaza Kuma stone Inscription. It is a very important source Bagan history. Dolomite plaques depicting Jataka stories, bronze figures of lotus flowers, broken pieces of fresco are on display in the show cases.

Other exhibits include stone implements of Prehistoric Ages, bronze tools, fossils, Buddha images of bronze, stone and wood belonging to the period between the A.D 11th and 13th centuries. Pieces of inscribed palm leaves, relic caskets, pottery, glazed pots and wares and different terra cottas. The museum open daily between 9 am and 4:30 pm (except Monday and Public holidays). 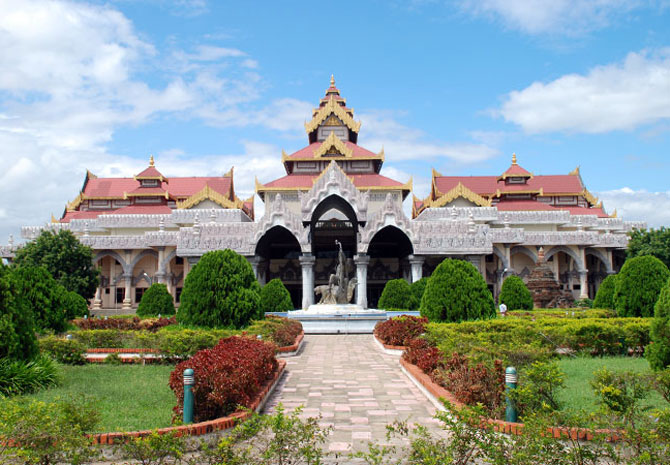 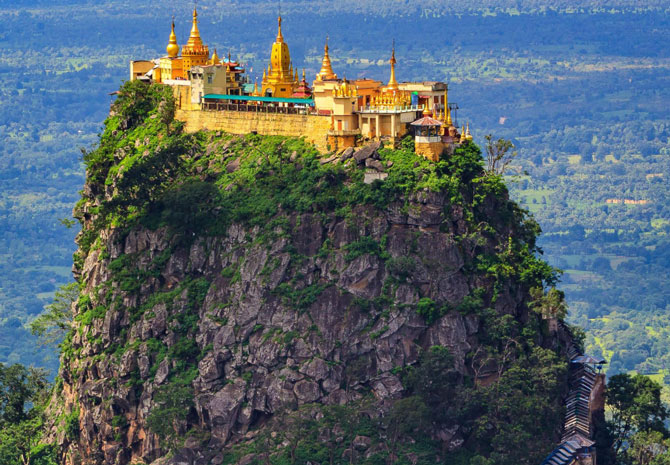 Mount Popa is an extinct volcano 1518 metres (4891 feet) above sea level and located about 50 km (31 miles) from Bagan, well-known as the oasis of the central Myanmar dry zone. It can see from Ayeyarwaddy River as far away as 60 km (37 miles) in clear weather. Mount Popa is perhaps best known for the abode of most powerful nats (spirits) and important nat worship center as well as a major pilgrimage destination. Mount Popa is home to 37 Mahagiri Nats (spirits).

To reach the top, there are 777 steps to the summit. You need to take off your shoes and socks to climb on top. Alone the way, there are many monkeys expecting treats. Sometimes they can get a little aggressive, you keep a tight grip on your possession.

Salay is an old religious center and located 20 miles (15 kilometers) south of Bagan. Salay is also on Ayeyarwaddy River. In Salay, there are ancient monasteries, beautiful woodcarving, beauty of this compact city of colonial buildings, monasteries and pagodas.

It is worth visiting to see the spectacular woodcarvings at Yoke – Sone monastery which is situated on the eastern bank of the Ayeywarwaddy River. You can visit 13th century the largest lacquer-ware Buddha Image in Myanmar. 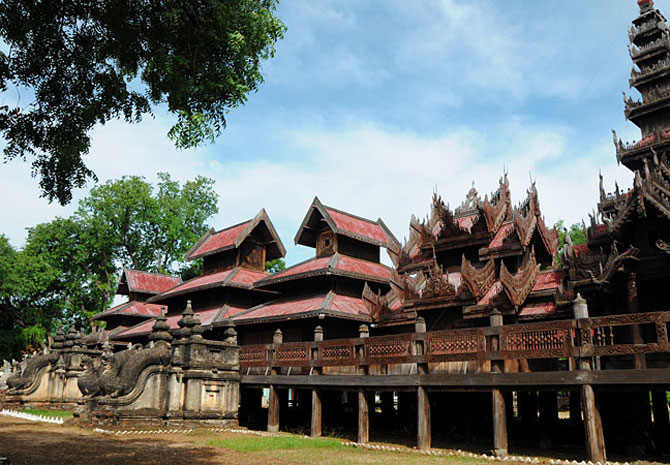 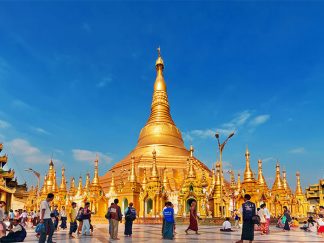 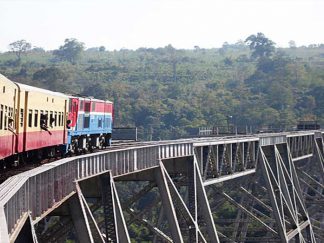